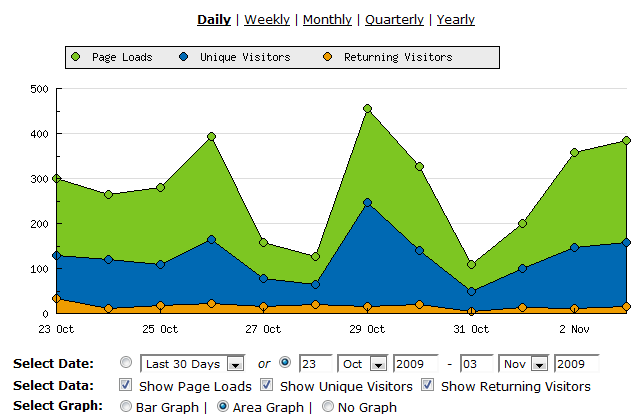 In the last few months I have been moving some websites from subdomains to new domains and sometimes changing there apperance.
Here is what happened on one of them…

The site was number One on Google for a long tail keywords phrase and it site was getting some nice traffic from this term.

After the move from its sub-domain life and going into its own domain I changed the template to a more suitable one and optimized the site to get more traffic.

One thing I did was the craft the Home page title so it would get even more traffic and it worked out nicely. The new theme was search engine optimized and I did not feel like I needed to do anything about it…

As I said, the site had a No. 1 position on Google, but after I wrote a new post on this site this happened to the traffic.

Once I noticed the drop in traffic I checked Google and saw the site was still No. 1 but not with the title of the homepage anymore.

The title shown by Google was the title of the last post and no longer this traffic attracting title of the Homepage!
This title was not really on topic of the search term so nobody clicked on it to check out the site!

I checked the theme and changed the header option to make sure I got the Homepage title back into place.

Bringing it Back on Track

So everything is technically set back to how it should be, and now it was time to get Google's spider to re-index the site so the homepage title was back where it belonged.

Writing a new post that to update the site did the trick and the site was back in a few days.

All looked good, but a day later there was again this drop in traffic. Now I can explain the first drop, then the recovery but not the second drop.

The only thing I can think of was the short time upgrade followed by something Google might do like switching back for some time serving search engine cached indexes if they upgrade the primary index.
If you have another explanation, I would love to here it!

After this initial drop and kick back the site is now doing well, thank you for asking.
It is still growing in traffic.

Conclusion: Keep track of your site after you do a mayor upgrade like changing themes or even system upgrades.
The thing you need to watch closely is that the so carefully crafted title of you homepage is still the same so it will keep getting you the traffic. Especially it you have the No. 1 position on Google that you wanted to get.

What Title to Use in Joomla or WordPress
Joomla or WordPress? Which one to Choose?
Does Google look at your Website Generator?
Free Keyword Suggestion tool for you Browser from Wordtracker
« It’s Done… The Joomla 1.5 SEO Book is out Now!
Start Blogging on SEO and More… »

I like Yoast.com, not only for the great WordPress SEO plugin, but also the … END_OF_DOCUMENT_TOKEN_TO_BE_REPLACED